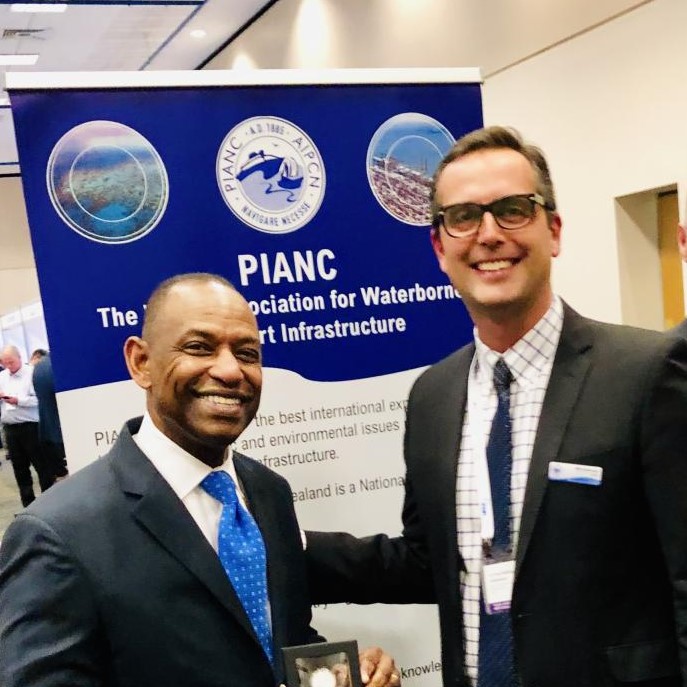 Congratulations to the Organising Committee for a great PIANC Pre Coasts & Ports seminar!

The purpose of the seminar was to improve preparedness for natural disaster and crisis events that can occur in ports and harbours, sharing knowledge and first-hand experiences from around the globe with the ultimate intent to protect the environment and the communities that are served by  port and harbour infrastructure.

The Seminar attracted guests from around Australia, as well as New Zealand, Japan and the US.

The two-day seminar held on the 9 & 10 September was designed for increased engagement by attendees during and in between presentations, resulting in more interesting discussions and deliberations, adding value to both speakers and attendees.

Journalists from the DCN covered the event and reported on several presentations, including the following:

Jared Pettersson (Enviser Ltd) spoke about the recovery of the Port of Lyttleton following the 2011 earthquake, while Baird Australia Director David Taylor described some of the challenges surrounding cyclones affecting the North West shelf.

Director of eCoast, NZ, Jose Borrero spoke about tsunami experiences and future mitigation, drawing upon several examples from the South Pacific. Dr Borrero pointed out that it wasn’t necessarily the size of the wave which caused most negative impact, but the strength of the currents. The difficulty is that currents are not easily modelled using any tsunami or long wave modelling. Borrero called for ‘robust numerical modelling to understand the range of possible tsunami effects.’

Managing Director of the Fremantle Maritime Simulation Centre, Capt. Rory Main, called for more safety training to avert accidents. Rules are not enough. ‘Most ports have a lot of rules’ he said, ‘what we need is an increase in skills.’ Main praised the Australian Maritime Safety Authority (AMSA) for its very high standard of regulation and safety but noted that the maritime industry worldwide needed a ‘paradigm shift’ in its thinking. Many ‘impose safety only because they’re told to.’

The full program is downloadable here.

More information about the speakers is here.